What Is Patent Ductus Arteriosus?

Patent ductus arteriosus (PDA) is a heart problem that occurs soon after birth in some babies. In PDA, abnormal blood flow occurs between two of the major arteries connected to the heart.

Before birth, the two major arteries—the aorta and the pulmonary artery—are connected by a blood vessel called the ductus arteriosus. This vessel is an essential part of fetal blood circulation.

Within minutes or up to a few days after birth, the vessel is supposed to close as part of the normal changes occurring in the baby's circulation.

In some babies, however, the ductus arteriosus remains open (patent). This opening allows oxygen-rich blood from the aorta to mix with oxygen-poor blood from the pulmonary artery. This can put strain on the heart and increase blood pressure in the lung arteries. 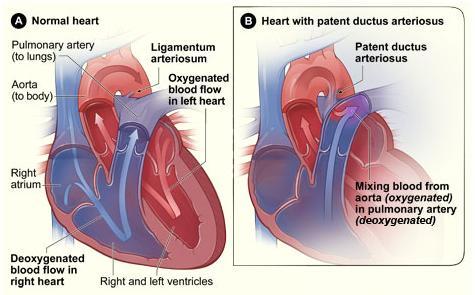 Go to the "How the Heart Works" section of this article for more details about how a normal heart works compared with a heart that has PDA.

If your baby has a PDA but an otherwise normal heart, the PDA may shrink and go away. However, some children need treatment to close their PDAs.

Some children who have PDAs are given medicine to keep the ductus arteriosus open. For example, this may be done if a child is born with another heart defect that decreases blood flow to the lungs or the rest of the body.

Keeping the PDA open helps maintain blood flow and oxygen levels until doctors can do surgery to correct the other heart defect.

PDA is a fairly common congenital heart defect in the United States. Although the condition can affect full-term infants, it's more common in premature infants.

PDA is twice as common in girls as it is in boys.

Doctors treat the condition with medicines, catheter-based procedures, and surgery. Most children who have PDAs live healthy, normal lives after treatment.

How the Heart Works

To understand patent ductus arteriosus, it helps to know how a normal heart works. Your child's heart is a muscle about the size of his or her fist. It works like a pump and beats about 100,000 times a day. 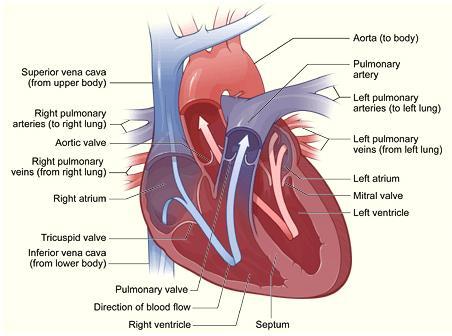 The heart has four chambers or "rooms."

Valves are like doors that open and close. They open to allow blood to flow through to the next chamber or to one of the arteries. Then they shut to keep blood from flowing backward.

When the heart's valves open and close, they make a "lub-DUB" sound that a doctor can hear using a stethoscope.

The arteries are major blood vessels connected to your heart.

The veins also are major blood vessels connected to your heart.

For more information about how a healthy heart works, go to the Health Topics How the Heart Works article. The article contains animations that show how your heart pumps blood and how your heart's electrical system works.

The Heart With Patent Ductus Arteriosus

The ductus arteriosus is a blood vessel that connects the aorta and pulmonary artery in unborn babies. This vessel allows blood to be pumped from the right side of the heart into the aorta, without stopping at the lungs for oxygen.

While a baby is in the womb, only a small amount of his or her blood needs to go to the lungs. This is because the baby gets oxygen from the mother's bloodstream.

After birth, the baby no longer is connected to the mother's bloodstream. Thus, the baby's blood must travel to his or her own lungs to get oxygen. As the baby begins to breathe on his or her own, the pulmonary artery opens to allow blood into the lungs. Normally, the ductus arteriosus closes because the infant no longer needs it.

Once the ductus arteriosus closes, blood leaving the right side of the heart no longer goes into the aorta. Instead, the blood travels through the pulmonary artery to the lungs. There, the blood picks up oxygen. The oxygen-rich blood returns to the left side of the heart and is pumped to the rest of the body.

Sometimes the ductus arteriosus remains open (patent) after birth. A PDA allows blood to flow from the aorta into the pulmonary artery and to the lungs. The extra blood flowing into the lungs strains the heart. It also increases blood pressure in the lung's arteries.

Full-term infants. A small PDA might not cause any problems, but a large PDA likely will cause problems. The larger the PDA, the greater the amount of extra blood that passes through the lungs.

A large PDA that remains open for an extended time can cause the heart to enlarge, forcing it to work harder. Also, fluid can build up in the lungs.

A PDA can slightly increase the risk of infective endocarditis (IE). IE is an infection of the inner lining of the heart chambers and valves.

In PDA, increased blood flow can irritate the lining of the pulmonary artery, where the ductus arteriosus connects. This irritation makes it easier for bacteria in the bloodstream to collect and grow, which can lead to IE.

Premature infants. PDA can be more serious in premature infants than in full-term infants. Premature babies are more likely to have lung damage from the extra blood flowing from the PDA into the lungs. These infants may need to be put on ventilators. Ventilators are machines that support breathing.

Increased blood flow through the lungs also can reduce blood flow to the rest of the body. This can damage other organs, especially the intestines and kidneys.

What Are the Signs and Symptoms of Patent Ductus Arteriosus?

A heart murmur may be the only sign that a baby has patent ductus arteriosus (PDA). A heart murmur is an extra or unusual sound heard during the heartbeat. Heart murmurs also have other causes besides PDA, and most murmurs are harmless.

Some infants may develop signs or symptoms of volume overload on the heart and excess blood flow in the lungs. Signs and symptoms may include:

How Is Patent Ductus Arteriosus Diagnosed?

In full-term infants, patent ductus arteriosus (PDA) usually is first suspected when the baby's doctor hears a heart murmur during a regular checkup.

A heart murmur is an extra or unusual sound heard during the heartbeat. Heart murmurs also have other causes besides PDA, and most murmurs are harmless.

If a PDA is large, the infant also may develop symptoms of volume overload and increased blood flow to the lungs. If a PDA is small, it may not be diagnosed until later in childhood.

If your child's doctor thinks your child has PDA, he or she may refer you to a pediatric cardiologist. This is a doctor who specializes in diagnosing and treating heart problems in children.

Premature babies who have PDA may not have the same signs as full-term babies, such as heart murmurs. Doctors may suspect PDA in premature babies who develop breathing problems soon after birth. Tests can help confirm a diagnosis.

Echocardiography (echo) is a painless test that uses sound waves to create a moving picture of your baby's heart. During echo, the sound waves bounce off your child’s heart. A computer converts the sound waves into pictures of the heart’s structures.

The test allows the doctor to clearly see any problems with the way the heart is formed or the way it's working. Echo is the most important test available to your baby's cardiologist to both diagnose a heart problem and follow the problem over time.

An EKG is a simple, painless test that records the heart's electrical activity. For babies who have PDA, an EKG can show whether the heart is enlarged. The test also can show other subtle changes that can suggest the presence of a PDA.

How Is Patent Ductus Arteriosus Treated?

Patent ductus arteriosus (PDA) is treated with medicines, catheter-based procedures, and surgery. The goal of treatment is to close the PDA. Closure will help prevent complications and reverse the effects of increased blood volume.

Talk with your child's doctor about treatment options and how your family prefers to handle treatment decisions.

Your child's doctor may prescribe medicines to help close your child's PDA.

Indomethacin (in-doh-METH-ah-sin) is a medicine that helps close PDAs in premature infants. This medicine triggers the PDA to constrict or tighten, which closes the opening. Indomethacin usually doesn't work in full-term infants.

Ibuprofen also is used to close PDAs in premature infants. This medicine is similar to indomethacin.

Catheters are thin, flexible tubes that doctors use as part of a procedure called cardiac catheterization. Catheter-based procedures often are used to close PDAs in infants or children who are large enough to have the procedure.

Your child's doctor may refer to the procedure as "transcatheter device closure." The procedure sometimes is used for small PDAs to prevent the risk of infective endocarditis (IE). IE is an infection of the inner lining of the heart chambers and valves.

Your child will be given medicine to help him or her relax or sleep during the procedure. The doctor will insert a catheter in a large blood vessel in the groin (upper thigh). He or she will then guide the catheter to your child's heart.

A small metal coil or other blocking device is passed through the catheter and placed in the PDA. This device blocks blood flow through the vessel.

Catheter-based procedures don't require the child's chest to be opened. They also allow the child to recover quickly.

These procedures often are done on an outpatient basis. You'll most likely be able to take your child home the same day the procedure is done.

Complications from catheter-based procedures are rare and short term. They can include bleeding, infection, and movement of the blocking device from where it was placed.

Surgery to correct a PDA may be done if:

Often, surgery isn't done until after 6 months of age in infants who don't have health problems from their PDAs. Doctors sometimes do surgery on small PDAs to prevent the risk of IE.

For the surgery, your child will be given medicine so that he or she will sleep and not feel any pain. The surgeon will make a small incision (cut) between your child's ribs to reach the PDA. He or she will close the PDA using stitches or clips.

Complications from surgery are rare and usually short term. They can include hoarseness, a paralyzed diaphragm (the muscle below the lungs), infection, bleeding, or fluid buildup around the lungs.

After surgery, your child will spend a few days in the hospital. He or she will be given medicine to reduce pain and anxiety. Most children go home 2 days after surgery. Premature infants usually have to stay in the hospital longer because of their other health issues.

The doctors and nurses at the hospital will teach you how to care for your child at home. They will talk to you about:

When your child goes home after surgery, you can expect that he or she will feel fairly comfortable. However, you child may have some short-term pain.

Your child should begin to eat better and gain weight quickly. Within a few weeks, he or she should fully recover and be able to take part in normal activities.

Long-term complications from surgery are rare. However, they can include narrowing of the aorta, incomplete closure of the PDA, and reopening of the PDA.