An implantable cardioverter defibrillator (ICD) is a small device that's placed in the chest or abdomen. Doctors use the device to help treat irregular heartbeats called arrhythmias.

An ICD uses electrical pulses or shocks to help control life-threatening arrhythmias, especially those that can cause sudden cardiac arrest (SCA).

SCA is a condition in which the heart suddenly stops beating. If the heart stops beating, blood stops flowing to the brain and other vital organs. SCA usually causes death if it's not treated within minutes.

Your heart has its own internal electrical system that controls the rate and rhythm of your heartbeat. With each heartbeat, an electrical signal spreads from the top of your heart to the bottom. As the signal travels, it causes the heart to contract and pump blood.

Each electrical signal normally begins in a group of cells called the sinus node or sinoatrial (SA) node. As a signal spreads from the top of the heart to the bottom, it coordinates the timing of heart cell activity.

For more information about the heart's electrical system (including detailed animations), go to the Health Topics How the Heart Works article.

A problem with any part of the heart's electrical system can cause an arrhythmia. Most arrhythmias are harmless, but some can be serious.

ICDs use electrical pulses or shocks to treat life-threatening arrhythmias that occur in the ventricles (the heart's lower chambers).

When ventricular arrhythmias occur, the heart can't pump blood well. You can pass out within seconds and die within minutes if not treated.

To prevent death, the arrhythmia must be treated right away with an electric shock to the heart. This treatment is called defibrillation.

An ICD has wires with electrodes on the ends that connect to your heart chambers. The ICD will monitor your heart rhythm. If the device detects an irregular rhythm in your ventricles, it will use low-energy electrical pulses to restore a normal rhythm.

Doctors also treat arrhythmias with another device called a pacemaker. An ICD is similar to a pacemaker, but has some differences.

Pacemakers give off only low-energy electrical pulses. They're often used to treat less dangerous heart rhythms, such as those that occur in the upper chambers of your heart. Most new ICDs can act as both pacemakers and defibrillators.

Comparison of an Implantable Cardioverter Defibrillator and a Pacemaker 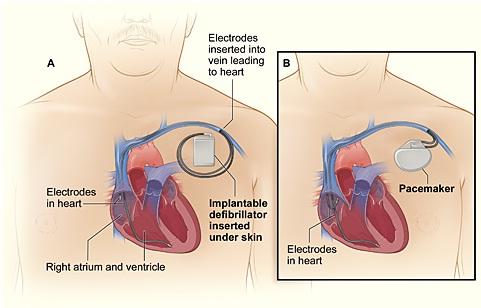 People who have heart failure may need a special device called a cardiac resynchronization therapy (CRT) device. The CRT device is able to pace both ventricles at the same time. This allows them to work together and do a better job pumping blood out of the heart. CRT devices that have a defibrillator are called
CRT-D.

Who Needs an Implantable Cardioverter Defibrillator?

Implantable cardioverter defibrillators (ICDs) are used in children, teens, and adults. Your doctor may recommend an ICD if you're at risk for certain types of arrhythmia.

For example, some people who have long QT syndrome, Brugada syndrome, or congenital heart disease may benefit from an ICD, even if they've never had ventricular arrhythmias before.

Some people who have heart failure may need a CRT-D device. This device combines a type of pacemaker called a cardiac resynchronization therapy (CRT) device with a defibrillator. CRT-D devices help both ventricles work together. This allows them to do a better job of pumping blood out of the heart.

Your doctor may recommend an ICD if he or she sees signs of a ventricular arrhythmia (or heart damage that would make one likely) on the following tests.

An EKG is a simple, painless test that detects and records the heart's electrical activity. The test shows how fast the heart is beating and its rhythm (steady or irregular). An EKG also records the strength and timing of electrical signals as they pass through the heart.

A standard EKG only records the heartbeat for a few seconds. It won't detect arrhythmias that don't happen during the test.

To diagnose arrhythmias that come and go, your doctor may have you wear a portable EKG monitor. The two most common types of portable EKGs are Holter and event monitors.

A Holter monitor records the heart's electrical activity for a full 24- or 48-hour period. You wear one while you do your normal daily activities. This allows the monitor to record your heart for a longer time than a standard EKG.

You may wear an event monitor for 1 to 2 months, or as long as it takes to get a recording of your heart during symptoms.

Echocardiography (echo) uses sound waves to create a moving picture of your heart. The test shows the size and shape of your heart and how well your heart chambers and valves are working.

For this test, a thin, flexible wire is passed through a vein in your groin (upper thigh) or arm to your heart. The wire records the heart's electrical signals.

Some heart problems are easier to diagnose when your heart is working hard and beating fast. During stress testing, you exercise to make your heart work hard and beat fast while heart tests, such as an EKG or echo, are done. If you can't exercise, you may be given medicine to raise your heart rate.

How Does an Implantable Cardioverter Defibrillator Work?

An implantable cardioverter defibrillator (ICD) has wires with electrodes on the ends that connect to one or more of your heart's chambers. These wires carry the electrical signals from your heart to a small computer in the ICD. The computer monitors your heart rhythm.

If the ICD detects an irregular rhythm, it sends low-energy electrical pulses to prompt your heart to beat at a normal rate. If the low-energy pulses restore your heart's normal rhythm, you might avoid the high-energy pulses or shocks of the defibrillator (which can be painful).

Single-chamber ICDs have a wire that goes to either the right atrium or right ventricle. The wire senses electrical activity and corrects faulty electrical signaling within that chamber.

The wires on an ICD connect to a small metal box implanted in your chest or abdomen. The box contains a battery, pulse generator, and small computer. When the computer detects irregular heartbeats, it triggers the ICD's pulse generator to send electrical pulses. Wires carry these pulses to the heart.

The ICD also can record the heart's electrical activity and heart rhythms. The recordings can help your doctor fine-tune the programming of your ICD so it works better to correct irregular heartbeats.

The type of ICD you get is based on your heart's pumping abilities, structural defects, and the type of irregular heartbeats you've had. Your ICD will be programmed to respond to the type of arrhythmia you're most likely to have.

What To Expect During Implantable Cardioverter Defibrillator Surgery

Placing an implantable cardioverter defibrillator (ICD) requires minor surgery, which usually is done in a hospital. You'll be given medicine right before the surgery that will help you relax and might make you fall asleep.

Your doctor will give you medicine to numb the area where he or she will put the ICD. He or she also may give you antibiotics to prevent infections.

First, your doctor will thread the ICD wires through a vein to the correct place in your heart. An x-ray "movie" of the wires as they pass through your vein and into your heart will help your doctor place them.

Once the wires are in place, your doctor will make a small cut into the skin of your chest or abdomen. He or she will then slip the ICD's small metal box through the cut and just under your skin. The box contains the battery, pulse generator, and computer.

Once the ICD is in place, your doctor will test it. You'll be given medicine to help you sleep during this testing so you don't feel any electrical pulses. Then your doctor will sew up the cut. The entire surgery takes a few hours.

What To Expect After Implantable Cardioverter Defibrillator Surgery

Expect to stay in the hospital 1–2 days after implantable cardioverter defibrillator (ICD) surgery. This allows your health care team to check your heartbeat and make sure your ICD is working well.

You'll need to arrange for a ride home from the hospital because you won't be able to drive for at least a week while you recover from the surgery.

For a few days to weeks after the surgery, you may have pain, swelling, or tenderness in the area where your ICD was placed. The pain usually is mild, and over-the-counter medicines can help relieve it. Talk to your doctor before taking any pain medicines.

Your doctor may ask you to avoid high-impact activities and heavy lifting for about a month after ICD surgery. Most people return to their normal activities within a few days of having the surgery.

What Are the Risks of Having an Implantable Cardioverter Defibrillator?

A damaged wire or a very fast heart rate due to extreme physical activity may trigger unnecessary pulses. These pulses also can occur if you forget to take your medicines.

Children tend to be more physically active than adults. Thus, younger people who have ICDs are more likely to receive unnecessary pulses than older people.

Pulses sent too often or at the wrong time can damage the heart or trigger an irregular, sometimes dangerous heartbeat. They also can be painful and upsetting.

If needed, your doctor can reprogram your ICD or prescribe medicine so unnecessary pulses occur less often.

Although rare, some ICD risks are related to the surgery used to place the device. These risks include:

Although rare, an ICD may not work properly. This will prevent the device from correcting irregular heartbeats. If this happens, your doctor may be able to reprogram the device. If that doesn't work, you doctor might have to replace the ICD.

The longer you have an ICD, the more likely it is that you'll have some of the related risks.